“You, yourself, as much as anyone in the entire universe, deserve your love and affection.”

248 lbs. THAT is the number that stared back at me on the scales that January morning. I’m sure I went pale in disbelief, and then denial because “there is NO WAY I weigh that!”, and as the day went on a little acceptance. Of course I knew I was overweight (and now I was, in fact, obese). I had been in denial and not caring, and then I realized I didn’t care about me, I didn’t think I was worth my time or effort, or worth my own love. It had to change; I had to change. I discovered it takes both physical and mental work to become healthy.

So I started with “dieting” a little on my own and then I joined Weight Watchers. I managed to lose about 25 lbs in a few months. And then I was stuck. That July a friend called me; she was trying to put together a group of women to take part in boot camp classes every Sunday night with a personal trainer, Devin Sherrington, who had been training her daughter’s soccer team. “Sure, I’m in!” Little did I realize what I was in for. The first class was brutal. And the next couple of days were even worse…. the toilet seat had never seemed quite so far away, driving a car with a manual transmission was painful, and I could barely type at work. Thank goodness the other women who took the class felt that same way. And so it began; every Sunday we grunted and groaned together, and during the week we would complain and gripe about our aches and pains. But we would also encourage each other with how well we were doing with our weight loss or how many more pushups we could now manage compared to the first class. We also counted on each other for healthy eating tips and support. We managed to convince Devin to start coming on Wednesday nights too, just so he could kick our butts twice a week. We complained every step of the way, but felt such a HUGE sense of accomplishment after every class. I ended up losing another 25 lbs and finally started to see a change in my body shape.

My life circumstances changed and I ended up moving. I didn’t make it to boot camp as often as I would have liked so I joined 360fit, the gym Devin had recently opened in Dartmouth. As my life changed, so did my body. I could always count on a great butt kicking class at the gym to challenge me physically, which in turn made me feel better mentally. The staff was supportive and I enjoyed the atmosphere. I signed up for my first spin class in February 2012 and I thought I would never survive. I needed the cardio workout so I showed up for my next spin class a couple of days later, even if certain parts of my body never wanted to sit on a bike seat again. In December 2012 I took a spin instructors course, and just last week I instructed my first class. Talk about facing your fears; I’d spent the past year in the back of the class, and suddenly I was at the front!

I have had a total 80 lb weight loss. I don’t deprive myself, I just try to make good choices. I know I have to eat clean 80% of the time (or one “cheat day” a week) and I know I have to schedule my gym workouts in as a priority. That is what works for me. But I also had to overcome some “defeatist” thoughts about myself and that takes a lot of work as well. As the journey towards physical health begins, mental and emotional health need to be a priority as well.

When it comes right down to it, I did it. I had to make the decision to be healthy; only I can determine what I put in my mouth, what exercise I commit to doing every day, and what my thoughts about myself and the world are going to be.

Each time I challenge myself, physically or mentally, I know I risk not succeeding the first time I try, but I also know that’s ok because it’s the not trying at all that hampers your growth. I can do many things that I thought I couldn’t. I am much stronger and more capable than I could ever have imagined. I’m not saying that this was in any way at all an easy process. In fact, it was one of the most difficult undertakings of my life. Tough for sure, but, trust me, its well worth it.

Thank you to my family, my friends, and the incredible 360fit team for their encouragement, support and love. I couldn’t have done it without you! 🙂 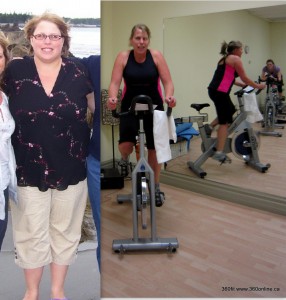